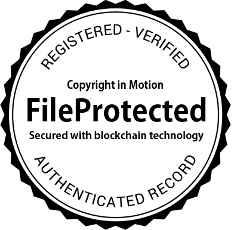 This FileProtected blockchain registration is certified proof that on 10/27/2020 2:32AM the 1 files listed below were digitally fingerprinted, timestamped and registered by Andy Rosen. The files, data and copyright information has been recorded permanently in the Bitcoin blockchain. It provides permanent proof of ownership, provenance and the authenticity of creative work, documents and information provided by the registrant.

© 2022 All Rights Reserved. All images, files and information appearing in this FileProtected registration, unless noted otherwise, are the exclusive property of Andy Rosen and are protected under the United States and International Copyright laws. The data may not be reproduced, copied, transmitted or manipulated without written permission. Copyright laws impose substantial penalties for infringement, and violators will be prosecuted to the full extent of the law.

Timing is everything. Duran Duran had been in seclusion for the previous year, and nobody had any recent images. I knew the resale demand would be huge. I told David we had to profile Simon Le Bon. I told him: “If you stick him on the cover sales will go off through the roof. Double the print run.” He didn’t take my advice, but he later wished he had.

I pulled out all the stops for the shoot. I managed to blag a free room at Blakes Hotel; one of the trendiest and coolest pioneers in the small boutique hotel trend. Each room was different. I opted for one with the sunken bed. I had plans for sexy Simon.

Duran Duran frontman Simon Le Bon and band-mate Nick Rhodes turned up on time with two starstruck girls from their record company PR department. I planned to get Simon to take off his shirt and have him pose bare-chested, seductively pouting at the camera. This was in direct contrast with my usual hard, gritty punk style portraits of Johnny Rotten or Paul Weller. The New Romantics were in, and I was happy to have a whole new scene and set of characters to photograph. Punk was incredible, but in the end, it became repetitive and predictable. After 90 minutes of hair and makeup, Simon was spotless, posing seductively on the sunken bed. For Nick, I did a portrait of him and his reflection in an art deco mirror. The shoot went smoothly. Both Simon and Nick were very professional and easy to work with. After they all left, I jumped up and down on the sunken bed in excitement, hurriedly packed up my gear, and raced to get my film to the lab.

Ask a question about the work, sales, licensing.